The first Judo Cultural exchange between our sister cities was in 1992 This involved some 50 delegates from Ube visiting Newcastle.

Since that occasion, Ube has brought Judo teams to Newcastle on 12 occasions, approximately every 2 years, and Newcastle has sent teams to Ube on 6 occasions, every 2- 4 years on average.

In 2010, Ube and Newcastle Judo representatives were part of a Lord Mayoral function at Ube City Hall that celebrated 30 years of cultural exchanges across many cultural areas between the two sister cities, including sport, education, commerce and the arts. 2017 is now the 37th year of our sister city relationship.

Mr Tomohiko Yamane, as head of Ube Judo Association, has lead all Ube team visits since inception of the program and Mr Kas Pilarski has been integral in all exchanges in Newcastle over that period, with the support of Mr Denis Boyd and Mr John Blishen, with Mr Ken McKenzie leading the operation of exchanges in and by Newcastle since 2005.

Yamane san is also Head of All Japan School Judo, one of the largest sporting organizations in the world, representing hundreds of thousands of young Japanese people to whom he often promotes our city.

Many people in the Newcastle Judo community have and continue to work hard in fund raising, planning and preparing to visit Japan in the coming years.

Most Newcastle judo players who have had the privilege of spending time with Ube Judo community in Japan have benefitted greatly, with many going on to win medals or become champions at State, National and International levels.

All judo players, officers and heads of school in Newcastle highly value the wonderful relationship that has thrived between our sister cities for many years now and hope that this relationship will only continue to grow stronger for all time. 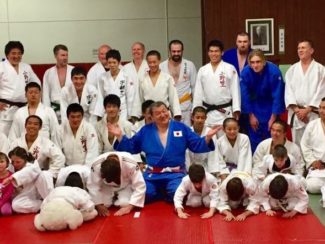