Ali Learns Judo in Japan – “These guys don’t play around!”

The following is an article written by Ali Yuldashev about his recent trip to Japan with Kerrye Katz and Yuki Uemura as part of a group Judo Tour.

At Judo NSW we’re committed to providing young people with cross-cultural experiences that are not just limited to Judo – these guys also taught English at a Japanese School! Thanks to both coaches for selflessly providing this once in a lifetime opportunity for our young people.

I want to begin by stating that I’m very much thankful for the opportunity my coaches, parents and everyone involved with this trip had provided me with. It has been a great experience and I’m hoping that whether in the distant or near future, this and similar opportunities for venturing out to new places and exploring the different ways of judo as a whole will be more widely accessible for Australia’s young (and older) players.

The trip to Japan in and of itself was a great way to get a feel for the Japanese way of judo and overall just inserting yourself into a foreign culture. This trip has widened my vision, not only through providing the exclusive and traditional judo technique but also through the realisation of how big the impact your upbringing, cultural surroundings and background may have on your general scope of life, your behaviours, identity and the way you act and present yourself to society.

Japan has taught me a lot, but if one thing isn’t clearer, its that the Japanese have a ton of respect for others and on top of that, they have also found ways to respect theirs but more importantly other people’s personal property. Their respect is evident, from the exceptional cleanliness of the many streets to the constant order of life, without disruptions. The Japanese are also super friendly and hospitable, they will welcome strangers and help anyone in need no matter their situation or background; in any situation, they could and would help a fellow out, and that’s what’s so amazing about Japanese culture, their openness is incomparable to that of the Western culture.

Regarding the judo itself, these guys don’t play around – they put everything into their fighting to try to be on top, no matter how big or heavy their opponent is. Off the mat, they are fun and friendly but as soon as they step foot on to the tatami, they become the tough and fierce fighters we’re so acclaimed with. The Japanese training sessions had mostly focused on randori, randori and randori again, although I do presume, they would also teach a bit about working on actual technique as well if we had stayed during a less busy period.

The trainings seemed like an endless loop of fighting, but one that I could clearly see the Japanese judokas really enjoyed, and that’s the most important aspect of this sport, enjoyment and happiness. Now at least to me, there seemed to be a tightly knit community of different people at each club, every dojo felt like a family, like a collective of like-minded people coming together to do what they’re so passionate and fond about. This made every dojo seem welcoming and charming, it brought real joy to see the warm relationships all around. I was absolutely overwhelmed.

Judo is a huge part of many people’s childhoods and maybe even adulthoods in Japan; it’s a nation-wide sport hugely recognized and respected by its people. I hope that Australia is also able to make a name for itself in this vastly expanding sport and I do believe we are able to make judo something bigger in Australia, to expand and to widen the span of this truly unique sport. 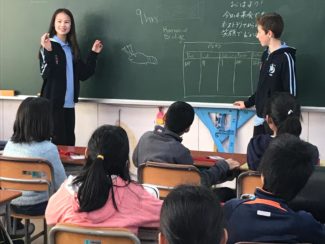